Cars and racing were a big part of Ron Berry’s early life, as his dad sponsored a race car at an oval track in Montrose, Colorado.  Ron started driving at age 7, and built his first motor at age 13.  He began racing in the 1950’s, when he first drove a V-8/60 midget at Hotchkiss Fairgrounds, then moved to a 1939 Ford Stock Car to compete on tracks on the western slope of Colorado.

Ron’s racing career accelerated with a move to Grand Junction in 1965, and he became a regular at Cactus Park Speedway in Grand Junction.  He also raced and held track records at speedways in Delta and Montrose, Colorado, as well as Moab, Utah.  Ron started Drag Racing in 1966, and for most of his active career he ran a weekly schedule of stock car racing on Saturday and drag racing on Sunday, adding Hillclimb to the mix for two years in the early 1970’s.  On the drag racing side, he enjoyed much success driving a Hemi Charger, and was undefeated in the Super Stock Auto class for several years.   A career highlight was made when he went up against Ford factory driver Ed Terry in a match race and won 3 of 5 passes.  On the oval track side, Ron drove to 99 main event wins and track championships at Cactus Park Speedway in Grand Junction in 1969 and 1970.

Ron’s driving career came to a close when his son, Jeep Berry, began his own dirt-track late model career and Ron assumed the role of crew chief.  These days, Ron is still in the pits when Jeep is behind the wheel, and is there to lend a hand with his grandson Dakota Berry’s blossoming career in the late models as well.

Ron Berry was known as a racer who was a hard charger, but raced clean and beat some well-known competitors on the track.  The Colorado Motorsports Hall of Fame is proud to include Ron in the Class of 2018! Ron Berry passed away in the Fall of 2020. 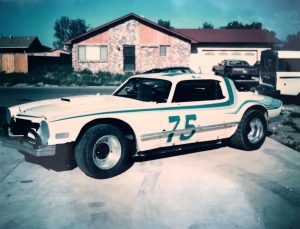