Jim Opperman’s racing career began in 1957 at Englewood Speedway, where he competed in the modified division in a car sponsored by The Competitor’s Company, a business Jim owned with his brother Ray. In 1974 he won his first main event and finished the season as the track champion. He moved to the late model division and formed a successful two-car team nicknamed “Papa Opp’s Chevies”, with Jim driving one car, the other driven by his son, Michael.  Jim retired from driving with the closing of Englewood Speedway in 1979, but continued as the owner of a team that competed in events around the country, representing Colorado well winning by over 100 events.

Wanting to once again be part of racing at a local track, Jim bought controlling interest in Colorado National Speedway in 1980, and transformed the 1/2 mile dirt configuration to a 3/8 mile asphalt track, building CNS into one of the premier short tracks in the country. Regional pavement track teams were ecstatic, and the transformative efforts Jim and his colleagues invested in the track resulted in a first class racing facility that endures to this day.

Jim Opperman’s career was distinguished by his reputation as a hard-working, clean driver with a strong competitive spirit, as well as a successful businessman who dedicated himself to

the growth and improvement of the sport he loved.  For his accomplishments and long standing support of the Colorado Racing community during his 40 year career, Jim Opperman was welcomed into the Colorado Motorsports Hall of Fame, Class of 2018. 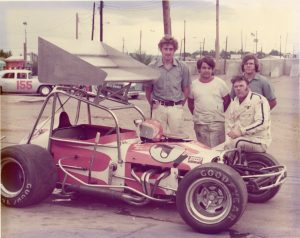