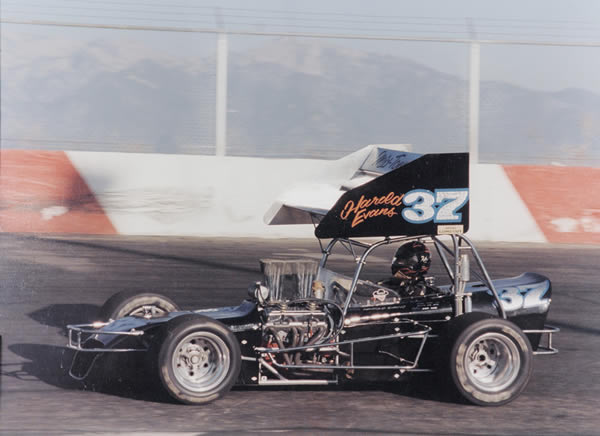 By any number of measures, Harold Evans is one of the most accomplished oval track drivers in Colorado racing history.  His career began by driving quarter midgets from age 7 to 10, Go-Karts form age 10-14, and motorcycles form age 14-16.  He went on to “dabble” in midgets, sprint cars, late models, an, eventually, his race car of preference: the Supermodified.  He was the Englewood Racing Association rookie of the year in 1968, and eventually served as the club’s president for 19 years.  A high point came in 1978, when Evans Racing purchased a Malloy Roadster.  Jerry Malloy and “HJ” formed a team that was together for many years and enjoyed a great deal of success.  Harold Evans’ competitive achievements include 18 ERA season Championships, as well as Supermodified division track championships at Beacon Hill/I-25 Speedway, Colorado Springs International Speedway, Big Country Speedway, and Colorado National Speedway, for an amazing total of 33 career championships, while setting ERA and track records that stood for many years at ten tracks in Colorado, Wyoming, and Nebraska.  In addition to regional competition,  Harold was the first Colorado driver to compete in the Coppper World Classic at Phoenix International Raceway, and returned many times to race in Sprint and Supermodified divisions.  He also competed with the “West Coast” supermods in California, Idaho, Oregon, Washington, Utah and Arizona in between local ERA events.

Harold Evans’ career includes contributions to the sport outside of winning races and titles.  He was ERA president when Englewood Speedway closed in 1979.  He reorganized the club and they “took to the road”, racing at a number of regional tracks to keep the club viable and operating.  While owning and maintaining his own cars for competition, Harold supported supermodified racing over the years by fielding competing cars that were driven by Roger Avants, Dean Gates, Tony Spano, Jack Backman Jr., Scotty Backman, Art Cervantez,  Joe  Priselac, and  Stevie  Gallegos.  He also organized and promoted several open competition races in Colorado.  These premier events brought top Supermodified drivers from all over the U.S. and Canada, including Davey Hamilton, Billy Vukovich III, Rebel Jackson, Jr., Scott Backman, Rick Veenstra, Kenny Hamilton, and Wally Pankratz, to Colorado tracks.  He also served on the tech committee at the Copper World Classic, as well as on the steering committee when the West Coast Supers were sanctioned by the United States Auto Club.

This Hall of Fame-worthy career can be summed up by words found in an article written by Dick Berggren for Open Wheel magazine.  When commenting on the drivers competing in the Copper World Classic, Berggren wrote:  “”HJ’ is the most exciting Supermod driver west of the Mississippi, and it is worth driving hundreds of miles to watch him race!”