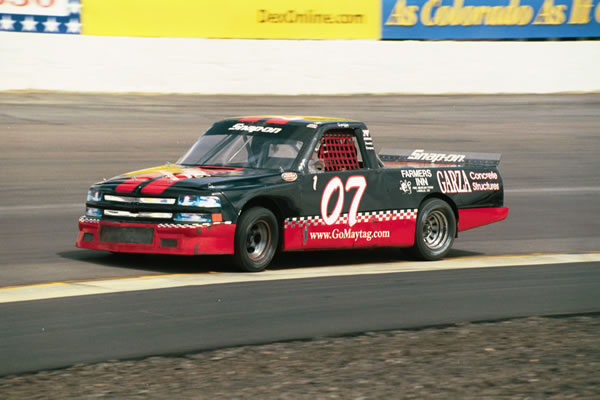 Chris “Spiffy” Leaf was born in Greeley, Colorado in 1968, and grew up in nearby LaSalle.  He began his racing career at Colorado National Speedway in 1986, and competed in Dwarf car, Street Stock, Grand American Modified, Pro Truck, and Southwest Tour Late Model divisions.  In addition to racing and winning multiple division titles at CNS, Chris raced at I-76 Speedway, Rocky Mountain National Speedway, Lamar Speedway, Holyoke Speedway in Colorado, Big Country Speedway in Cheyenne, Wyoming, and tracks in Amarillo and San Antonio, Texas.  Until his passing as a result of a motorcycle accident in Florida, Chris had raced for 23 years, winning 39 races on dirt tracks and 66 races on pavement tracks while claiming a total of 10 Championships in multiple racing divisions.  A shining example of his competitiveness can be found in the recalling of a major, 2-day event in Amarillo, Texas.  After starting in the back of the 7th heat, Chris did not qualify for the main event on Saturday.  The following day, he won the E-main, D-main, C-main, and B-mains.  He started the feature event at the back of the pack, lost his brakes with 40 laps to go, and finished 6th with the right rear tire worn down to the cords on a car “without a scratch on it”.  “Spiffy” was a driver that lived to race, and at the time of his passing had both a Pro Truck and a Super Late model complete and ready to go for the upcoming season. His competitive fire and skill in handling his race car are missed to this day by both fellow drivers and race fans throughout the region.