Bill Ray has been selected to receive a Jerry Van Dyke award in recognition of his 57 year career supporting Colorado Motorsports.  His interests began watching stock car racing at Macon County Speedway in Decatur, Illinois. After moving to Colorado in 1953, he watched the races at Englewood Speedway until he was old enough to enter the pits.  He was introduced to Jim Opperman, and joined his pit crew.   Bill eventually bought his own car and competed in the modified division from 1962 to 1978, racing against Joe Lehman, Jim Opperman, Jim Venable, and other notable and stout competitors.  While Englewood Speedway remained his favorite track, he also raced at speedways such Lakeside, Colorado Springs, and Pueblo in Colorado, as well as tracks in Benkelman, Nebraska, Cheyenne, Wyoming, and Oklahoma City.  He says two memorable events in his career were “getting upside down while running over someone’s tire at Englewood”, and “breaking a steering arm, which led to running into an outhouse in Benkelman”. 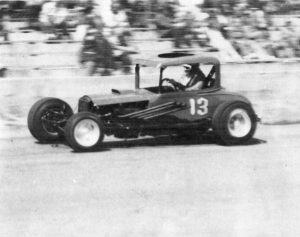 In addition to his time on the track, Bill served as Englewood Racing association president from 1966-1978.  He also served as pit steward for a total of 23 years at Englewood Speedway and Colorado National Speedway, during which time he worked for track owners Richard Codner, George Butland, Jim Opperman, and Marshall Chesrown.  Bill has said he did his best to run good, fast pit programs at the races, and always tried to be considerate of others.  Those who participated in those events know that Bill succeeded in meeting those goals, and were able to depend on him to run things professionally and fairly.  Bill Ray earned much praise and respect for his dedication to oval track racing in his long and accomplished career, and his efforts are saluted with the 2018 Jerry Van Dyke Award.