Walt Pickard’s motorsports career involved racing at southern Colorado oval tracks, where he compiled 112 main event wins over 17 years of competition.  Born in 1932, Walt grew up with a love of all sports, playing on teams in football, baseball, and wrestling that won several championships.  His racing career began in 1957, when he drove a race car on a dare from friends Bob Hull and Wade Watts.  From that point until 1972, Walt was a competitor in the modified division, winning four track championships at Pueblo Speedway, and setting a track record that still stands by winning ten events in one night at Beacon Hill Speedway.  While Walt drove for Wade Watts, Charlie Shepherd, Charlie Simpson, and Otis Roberts in the early years of his career, Walt enjoyed a close friendship with Roger Nelson and drove his red #34 coupe for the bulk of his competitive days.  The majority of wins and championships in Walt’s record were wonin partnership with Roger and the Nelson family.Highlights from his early racing days include competing against Bobby and Al Unser at the Colorado State Fairgrounds, and qualifying fifth at the Hutchinson Nationals in Kansas while driving the only six-cylinder powered car against 120 V-8 powered entries.

Walt and Marion Pickard began managing Beacon Hill Speedway in 1970, and purchased the track in 1972.  Along with Mike Bonicelli and Rich Codner, Walt played a key role in forming the Olympia Challenge Cup Late Model racing series that brought some of the premier drivers from the across the nation to the track.Walt’s legacy as a promoter also included dirt track auto racing on the 1/2 mile track at the Colorado State Fairgrounds from 1972 through the 1974 seasons, as well as running the race program at Raceway Park in Colorado Springs for the 1974 season

Walt Pickard enjoyed success at many levels in his career as a driver, track owner, and race promoter.  He is a richly deserving inductee into the Colorado Motorsports Hall of Fame, Class of 2018. Walt passed away in October, 2020. 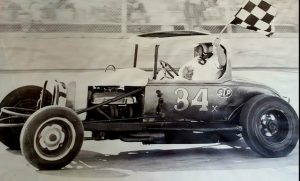