In 1975, after a few high school friends who were involved with motorcycle racing talked him into giving it a try, Ricky Orlando started his racing career in South Florida at the Moroso Raceway in West Palm Beach.  He moved to Colorado the next year, and began competing locally in the MRA.  In 1983, Ricky moved to the pro level, racing in the AMA Superbike series, and his first attempt at the prestigious Daytona 200 resulted in a seventh place finish.  He raced in those early years alongside some of the greatest riders of the eighties–Kenny Roberts, who in the view of many put motorcycle roadracing on the map; Wayne Rainy, Wes Cooley, Freddy Spencer, Fred Merkel all became the competition.

Over a long and accomplished career, Ricky’s most memorable races include the 8 hour World Endurance Championship in Suzuka, Japan, where he finished seventh. Among his best finishes in the US were third place in the 1987 Laguna Seca 600 Supersport race, and third place in a Formula 1 AMA national at Mid-Ohio in 1984. He also finished sixth in the 2004 Daytona 200, and held the mileage record for that race during the AMA pro national series. His career led him to races across the U.S, as well as England, Japan and Macau, with his favorite track–by far–being Barber Motorsports Park in Birmingham, Alabama.  Ricky also continued to compete in the Daytona 200, and in 2011, he broke the all-time record for laps completed.

He cites a 2001 Suzuki GSXR 1000, on which he won the MRA State Championship, as one of his favorite rides, and is quick to credit those who have helped him along the way.  “Over the years I’ve had a few different tuners. The first year I went pro, Dennis Zickrick built my bike. As I returned to doing more Colorado races, the Cycles of Boulder crew supported me. James Minert also played a big part in helping. Since 1995 Marvin Rosencrans and been with me, Pete Brandauer came onboard a few years ago, and Rocky Mountain Kawasaki, Arai Helmets, EBC Brakes, and Hindle Exhaust have all been along for the ride with their generous support”.

Being a smooth and consistent rider has, no doubt, contributed to the longevity of Ricky’s career and made him standout among other racers. Over the years, he has always helped other racers at the track, or with his venture in the Ricky Orlando Motorcycle School.  “Being a rider coach is certainly something that I have been doing to give back to the sport throughout most of my career.  It’s great when you take a hobby and turn it into a profession and it stays your passion.”

In recognition of his long and accomplished motorcycle racing career, Ricky Orlando was inducted into the Colorado Motorsports Hall of Fame in 2018. 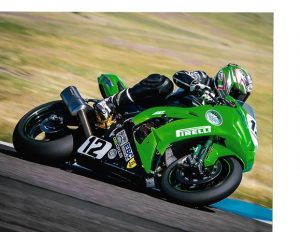