Jeff Walters’ career began in 1978 as he raced go-karts in Boulder and Longmont.  He graduated to full-sized race cars while competing in the Bomber/Pure Stock class–first at Lakeside Speedway, then at Colorado National Speedway in 1981.  As his career progressed, Jeff competed on both dirt and paved oval tracks in five states, racing in the Pure Stock, Sportsman, late model, and most prominently, IMCA modified divisions.  His accomplishments include eight track championships, five of which were in the modified division, and the national IMCA Rookie of the Year for the Rocky Mountain Region in 1993.  He became the first driver to win track championships in two different IMCA competition regions within two different time zones, with titles at both I-76 Speedway in Fort Morgan, Colorado and Elmwood Park Speedway in Norton, Kansas.  In addition to the championships he has earned, Jeff’s racing seasons have been marked with recognition for most quick times, most trophy dashes, most main event wins, as well as best appearing car, Sportsman of the Year, and Perfect Attendance awards given at multiple tracks and by numerous racing associations.  He was even dubbed the “Winningest Driver, Ever” at I-76 Speedway as testament to his winning ways.

Jeff Walters enjoyed 36 years of active competition that saw him claim victory in over 300 races.  When he arrived at any track, his fellow competitors knew their work was cut out for them.  These days, Jeff competes on an occasional basis in IMCA modified races of his choosing, and has restored a modified race car driven in years past by Denver area driver Harry McCool for participation in Vintage racing events.  For his lifelong dedication and hard-charging ways, Jeff was proudly welcomed into the Colorado Motorsports Hall of Fame, Class of 2018. 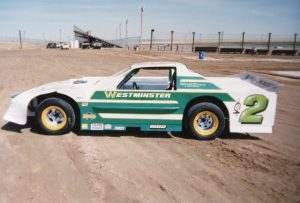