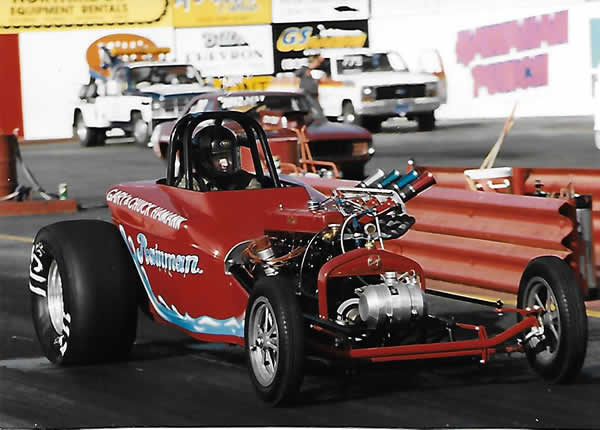 Chuck Hamann’s love of cars began when he started working at his father’s garage at the age of 14. He built his first hot rod, a 1927 Ford Roadster, when he was a senior in high school, and built his first dragster, powered by a Model A engine, in 1959. In 1960, he decided to be really different and put a “straight-eight” Buick engine in the T-Roadster he built. The disadvantage was that there weren’t any after-market parts available, so he built his own manifolds and engine parts. The Buick won the 1961 Wy-Neb-Co Championship, winning more races than any other car in Wyoming, Nebraska and Colorado.

Chuck won the NHRA West Central Division Championship in 1962 with partner Richard Reiber. At the 1962 U.S. Nationals, the Roadster lost high gear on the final race, but still was the National Top Speed Champion. The straight-eight roadster was ranked as one of the “Top Ten Cars” in the United States in 1962 and 1963 by N.H.R.A, and received the “Autolite Award” for top speed of class at the 1962 U. S. Nationals.

The end of the 1963 points season found the Buick-powered D-altered Roadster tied with the Seevers, Weisner and Owens A/Gas Super Charged Willy’s . The National Hot Rod Association decided the championship would be determined by a run-off between the two cars. The “Christmas Tree” starting system was flown in from California for the race in Julesburg, Colorado. The Roadster beat the Willys in the first “Christmas Tree” elimination race in the West Central Division. This was the first time the Roadster received a head start based on national records. Prior to this, the Roadster won over 150 races, including eliminators, in “heads up” races started by a flagman.

Chuck was appointed “Regional Advisor” for the NHRA in 1963, working for many years promoting safe racing and public relations. From 1965 through 1969 he was named the “Top Advisor” in the West Central Division.

Chuck’s next project was a Chevy-powered, home built C-Dragster, which was raced throughout Colorado and Wyoming. It set strip records and won numerous eliminators. Chuck was racing the final round of competition eliminator at Cheyenne, Wyoming drag strip in 1969 against “Taks Toy.” Rain had delayed the race, and after crossing the finish at over 140 miles per hour, the parachute failed and he could not stop on the wet strip. The dragster flipped end over end three times, destroying the car and wreaking havoc with his body.

In 1971, Chuck became one of the first automotive mechanics instructors at Morgan Community College, where he was the prime force in developing the program and curriculum. That year, two of the students he coached won the Colorado State Plymouth Trouble Shooting Contest. This was quite an honor for the students, the school, and Chuck. Chuck was elected president of the Trade and Industrial Education Division of the Colorado Vocational Association, served on the Board of Directors, and was one of two individuals chosen to represent Colorado at the national convention in Dallas, Texas.
Chuck was elected to the Fort Morgan City Council in 1977, and served for four years. In 1981, he was elected to the Northeastern Colorado Council of Governments, and served as vice chairman. In 1985, after a break in public service, he was again re-elected to the City Council and was elected mayor pro-tem.

With racing still in his blood, Chuck and his brother Gary decided to go nostalgia drag racing in 1988. A new, safer 4130 Chrome moly chassis was built for the Buick Roadster, which was then raced from Bakersfield, California to Indianapolis, Indiana. Always the low-budget racer, all of the construction–engine, model t-body and paint–were home built, including the fuel injection.

Chuck retired from racing in 2002, and now resides in Loveland, Colorado with hobbies of silver smithing, oil painting and sculpting.