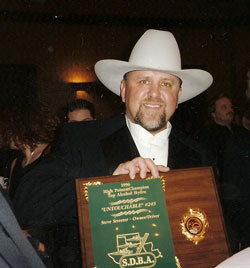 Born in Sioux City, Iowa, Steven Streeter is now a longtime resident of Denver. He is now CEO of Steel Lock General Fence Contractors. His racing career really got started in the late ‘60’s and early ‘70’s, when he raced snowmobiles for Team Polaris. In 1979 through 1989 he raced flat bottom boat lake racers as a hobby. In 1991, he became involved with the Rocky Mountain Drag Boat Association. During this period he fielded a boat called, “Breathless I” and in the Southern Drag Boat Association ran boats named “Breathless II” and “Untouchable” from 1991 to 1996.

During a great career he received the Southern Drag Boat Association award for “Untouchable Blown Boat of the Year.” Also in ‘96 he was the SDBA high points champion and set their ET record of 5.728 winning the prestigious Bill Hartman Memorial Cup. That same year he set the SDBA fastest speed at 215 miles per hour and in 1994 and again in 1995 he made 200 miles per hour passes on the Missouri river. There are many more records and speeds we could mention if we had the space but let us simply close with a quote from this recipient, “It’s about having a good time.”