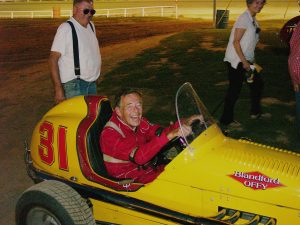 Pete Brandenburg has been chosen to receive the 2015 Jerry Van Dyke Award, which is given in recognition of lifelong dedication to Colorado Motorsports by an individual. Pete began racing at Lakeside Speedway at age 21, and over the course of his racing career he was competitive in figure eights, modifieds, late models and midgets. His award acknowledges his dedicated involvement in racing organizations and clubs. He has been on the Englewood Racing Association Board of Directors, RMMRA Board of Directors, and the Colorado Motorsports Hall of Fame board of directors. He also has been recognized with lifetime memberships in the Arapahoe Racing Association and Englewood Racing Association. Through his sign-painting business, Pete has provided banners, signs, decals and other promotional tools to the organizations and clubs of which he has been a part. Pete has been an energetic and active member of the racing community for decades.

As 2015 Jerry Van Dyke Award recipient , Rob Johnson, said: “Pete and Jerry Van Dyke played an enormous role in creating the CMHOF, and then finding a way to kick start it again 20 years ago.  We wouldn’t have the country’s premier state motorsports hall of fame if it weren’t for dedicated folks like Pete.  I loved his passion for motorsports and our country.  We should be proud to carry on the legacy that these guys created. ”  Pete Brandenberg passed away on February 1, 2018.