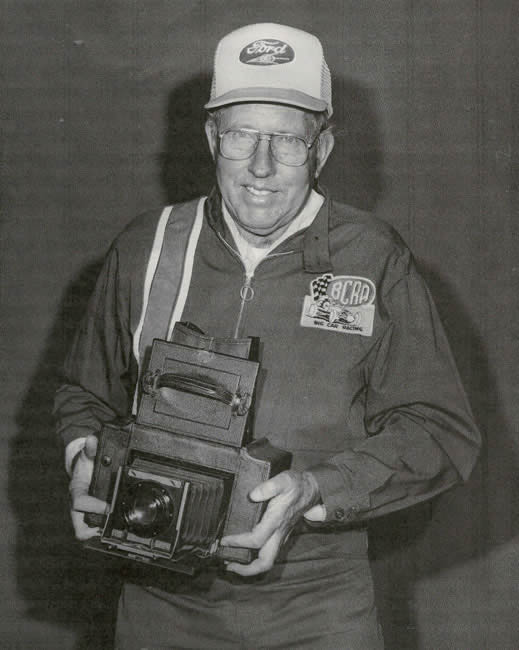 Born in Oklahoma, Leroy Byers’ love for racing began when he attended a sprint car race at the Oklahoma State fair. Moving to Aurora, he struck up acquaintances with several of the midget drivers, climbing over the track fences into the pits on several occasions due to grand stand sell outs. He once landed on Lloyd Axel’s tool box on his way over. His interest would take him to races at the fairgrounds in Pueblo and the track in Brighton.

He drove his first midget race in a V-8 ford midget and still owns that car today. In 1952, after attending numerous races in Indiana over a three month stretch, including the Indy 500, he raced in various states running several AAA races during that period of time. After the 1956 season he stayed busy taking photos for over 40 years at various tracks to numerous to mention in this presentation. He continues to do so until this day. You would run into him at tracks in Colorado, as well as venues in Oklahoma, Kansas, Missouri, Iowa, Nebraska, Arizona and New Mexico. He started shooting photographs at CNS after the track was built. He retired from the U.S. Post office for a number of years which gave him an opportunity to take photos at the races. Although being a race car driver and owner were important to him, being a photographer was where he really found his niche. He became famous for not only his photos, but his extensive racing collection. It seems he kept almost every race car he ever touched and every photo he ever took. Among the racing community he was known as a pack rat but most of us know him by “by golly,” as this was a phrase he always used when he talked to anyone. He has been involved one way or another with Colorado racing for more years than one can remember.