Kelly Boen was born in 1963 in North Dakota. In 1967, his parents, Harlan and Sharrell, moved their family to Colorado. Kelly’s dad soon began racing Figure-8s at Englewood Speedway. While his dad competed, Kelly made friends at the track, pitted for buddies and learned some mechanical lessons along the way. His dream to go racing was coming together, but it nearly never came to be. 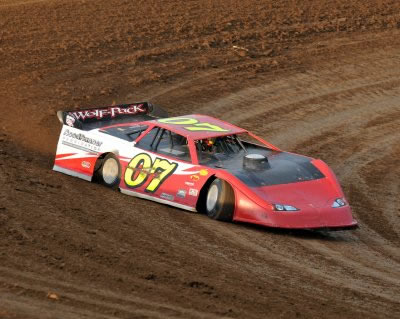 At the age of 12, Kelly was hit by a car. He nearly died. He spent the entire summer in the hospital, slowly healing, thankful to be alive. After coming home, he spent the next couple of years pitting on a car for Frank Marcello.

At 17, Kelly took his welding skills and went to work for the Fruehauf Trailer Company. That job refined his techniques. With the means to go racing in 1980, Kelly dug an El Camino frame out of the local wrecking yard, turned it into a racing chassis, and the finished product was a ’68 Chevelle #07 to be campaigned in the Sportsman division at Colorado National Speedway.

Kelly ran full-time at CNS, racing and wrenching with the help of high school buddy Doug Hoffman. They managed to keep the car on track and be reasonably competitive. However, victory eluded them until he collected his first win in 1983.

In 1985, Kelly created RoadRunner Fabrication. His welding-based company was doing well, so when CNS converted from dirt to asphalt in 1988, he was prepared to step up in class and competition. He ran an IMCA Modified at Fort Morgan Speedway and Rocky Mountain National Speedway.

From 1989 through 1999, Kelly won 76 IMCA-sanctioned feature races. He tied for the IMCA National Points title twice, was Champion of IMCA’s Mountain Region in 1996 and 1997, and was a three-time Track Champion at Rocky Mountain National Speedway from 1995-1997. In 1996, Kelly “showed up” at Boone, Iowa for the IMCA Super Nationals, and promptly won both the “Harris Auto Racing” Race of Champions and the A-feature (a feat accomplished by only one other modified racer).

During the 1990s, Kelly was also able to race locally at Rocky Mountain National Speedway, and on a national level, Kelly would tote both cars to competitions. One series that afforded the opportunity to race either on a given night was the National Championship Racing Association. The NCRA had annual stops on the holiday weekends at a little track in the sleepy town of Belleville, Kansas. Kelly stopped in for his first race in 1999, and tried out the Modified with little success.

He can back a year later and began his assault on the records on the high banks of Belleville in an NCRA Late Model. Kelly won his first race at Belleville in 2000 against the best NCRA drivers at that time. From then on, Kelly would make Belleville his second home. He took three out of four races in 2002 and 2005, two out of three in 2006, and lapped all but the runner-up in the 2007 Labor Day finale on the Belleville High Banks.