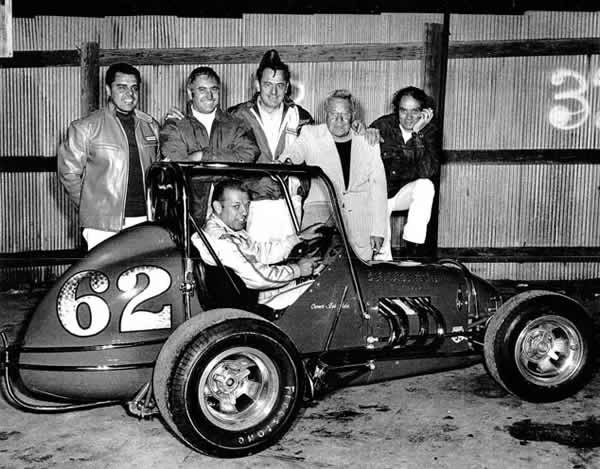 Bob Olds was born in 1927 in Denver. At age 13, while on his paper route in Park Hill, he was invited into Buddy Martinson’s garage to polish wheels and clean his midget racer. He did such a good job that the crew even snuck him into the pits at Gilmore for Turkey Night. Bob went to East High School and bought a 31 Model A Roadster for $120, took off the fenders, and started drag racing all over town, including timing and speed trials at Lowry Field and old Tower Road – which is why he is a charter member of the Denver Timing Association.

He continued drag racing until joining the Army in 1945 and when on leave he would help Harry Duff and Bob Van Buskirk work on their midgets. In 1946, he bought a Ford roadster (an old Pikes Peak car) and raced it at Englewood Speedway for a few years. Starting in the late 1940s and into the 1960s, Bob travelled to races all over the country and worked on pit crews with 1948 national midget champion, Johnny Tolan, and local drivers Joe Giba, and Buddy Shay.

In the early 1950s, Bob took his 32 Ford Coupe with a blown Flathead to Bonneville and turned 107 mph, but wanted to go faster, so Bill Kenz loaned him some wheels and tires and he got up to 112 mph. While there, he met Tom Beatty and helped him work on his belly tanker. Doing him a favor, Tom let Bob drive his car on the trip out where he turned 186 mph, and Tom did the return trip and ran 192 mph. Bob never lifted and was puzzled by his slower speed so Tom finally told him that he had a headwind and it wasn’t his fault.

He also worked on Leo Dobry’s pit crew for Indy style cars at Centennial Racetrack, and on the Pikes Peak car of Bus Hammond, who won there in 1953. During the month of May each year from 1959-1965, Bob went to Indianapolis, Indiana. Doing whatever he could to help his friend and car owner, Myron “Buz” Osborn, Bob was on the pit crew, and was also the body and paint man for numerous cars including the Radsco Battery Cable Special, the Myron Osborn Special, the Greenman-Casale Offy, the Denver Chicago Special (Watson-Offy), cars sponsored by Denver Chicago Trucking, White Spot Restaurant, Apache Airlines laydown Offy, and, the Wilbur Clark rear-engine Offy.

In 1974, Bob bought one of the early VW powered midgets from LTC in Costa Mesa, California. Bob’s son Scott began re-building the VW engines for his dad, and in 1975, Larry Rice set a one lap record at Englewood Speedway of 15:39 in the Bob Olds Motors VW (also known as Lulu’s Luv Bug). In 1977, Bob hired Sam Sauer to drive and Frank Peterson to build the engines; the team worked well with a track record at Colorado National Speedway (dirt) of 18:47 and victories in eight trophy dashes, eight heats, and eight main events resulting in the 1977 Owner’s championship for Bob and crew. In 1978, Bob was elected president of the Rocky Mountain Midget Racing Association, but tragedy struck on May 20th at CNS in the first heat race of the season when Sam Sauer was killed in a violent North turn crash in Bob’s new VW midget. After Sammy’s death, Bob ran his cars competitively for a few more years and helped numerous other racers set-up their midgets and sprint cars.

Through the 1980s, his son Dave ran a Formula Ford in SCCA and other local clubs, usually finishing in the top 10 during his first year, but after Bob tweaked on his car a few times and provided some instruction, Dave consistently finished in the top five. With a Fine Arts degree from Denver University, Bob is an accomplished artist and has created hundreds of paintings, including some beautiful, professional quality paint jobs on numerous race cars, and even airplanes. Currently, Bob uses his artistic gifts painting Hall of Fame drivers and cars at our favorite tracks of yesteryear, and he shares his mechanical expertise with his sons and other Colorado Vintage Oval Racers with their vintage racecars, all while running a successful car sales business for more than 44 years.