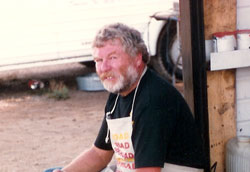 Born in Clarks, Nebraska, Bill Rice built his first car, a 1944 coup, which he raced in Grand Island, Nebraska and Julesburg, Colorado. In 1965, he teamed up with Pete Dudden to field a Mark Williams front engine AA fuel dragster with a Ron Bement body and a super-charged 354 cubic inch Chrysler Hemmie and ran the car at Continental Divide Raceway, Rocky Mountain Dragway, and Thunder Road Dragway. It was one of the first cars Colorado to go over 200 miles per hour in less than 8 seconds. In 1967 and 1968, the team of Rice-Williams set NHRA’s Division Five on fire. They had two new dragsters, one driven by Roger stark and the other by Hall of Famer Mark Williams. Mark won over 90% of his races in 68 and set a Colorado land speed record of 231 miles per hour in 7 seconds.

Other drivers for Rice included another Hall of Famer, Alan Bockla. As for the reason for their success in 1958 they all said, “We’ve got Bill Rice.” From 1972 – 1975 he teamed up with Pete Colvin with a single-seat desert racing VW. In 1980 Frazier and Rice became only the third drag racing team to travel on a national level. They competed in 33 NHRA races as well as races with other sanctioning organizations. A number of top drag race champions were associated with Frazier and Rice in 1980 and 1981. In 2002, he joined his father and began racing single-seat off road buggies again.