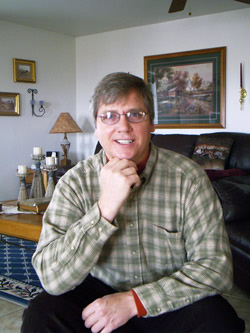 Arlo Englund’s first race was at age 14 in October, 1971, on a 90 cc Suzuki. His second race came shortly after and he won it. Arlo was then fortunate to get a sponsor, Robo Car Wash, and got his first racing bike in December, 1971, a 1972 Yamaha 125 MX. In 1972 Arlo competed in several races including the Pikes Peak Hill Climb. After becoming an SRAC Pro rider, he placed third in the 250cc Pro class in the state championship race. The goal for 1973 was to become the #1 250cc Pro rider, which was accomplished. In 1974 Arlo started competing in several out-if-state races to obtain his AMA Pro license. Arlo rode a four race qualifier series and ended in second place. This earned an invitation to race the International Moto Cross held in Baldwin, Kansas. Arlo also attended the Evel Knievel Moto Cross later that year and won the wheelie contest. Highlights for 1975 include first place 250cc Pro, second place 500cc Pro in the Mid America Moto Cross Championships in St. Peters, Missouri. In 1976 it was off to Florida Winter Series, where he placed fifth, and on to the national circuit. Experiencing a little bad luck and recovering from an injury, the return was good, placing third at a 125cc national in Ohio and 11th overall for the year. Arlo started with a sixth place finish at the first 125 125cc National in 1977 and digressed from there forcing Arlo to go back to Colorado and re-group. Arlo found a new sponsor and was excited to be on the Vickery Yamaha Racing Team. Spending more time at the local races got Arlo the number one in the 250cc class. Arlo went to California that fall and won the Consolation race at the Anaheim Super Cross. In 1978 Arlo decided to stay in Colorado, where he won the 250cc and 500cc State Championship. For 1979, it was a great year on the Vickery Yamaha placing second in the Florida Winter Series. In 1980 Arlo was back on the 500cc national circuit placing sixth overall. 1981 was Arlo’s last year to compete in National Moto Cross, placing ninth overall. In 1982, Arlo won the Pikes Peak Hill Climb in the 500 cc class and again in 1991 in the 250cc class.