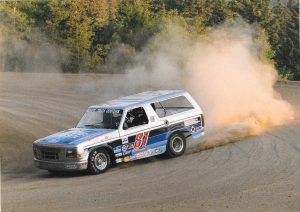 Leonard Vahsholtz is the owner of Vahsholtz Racing, with his wife, Barb. Leonard raced for a record 32 years in the Pikes Peak International Hillclimb, with 18 class wins. In 1993, he won the Stock Car and Truck divisions, while setting course records and winning the Colorado Hill Climb Association points championships in both divisions. Also in 1993, Vahsholtz racing had a “triple double”, with wins and records set in three divisions by two drivers. In addition to Leonard’s Stock Car and Truck class wins and records, the Open Pro Motorcycle division was won by son Clint Vahsholtz. Since Pikes Peak has since passed a rule that drivers can only complete in one class, this record should last forever. Leonard retired from racing in 2008 from a career that includes competing in 142 Hillclimbs with 100 wins, but has continued as a car owner. As of 2015, the Vahsholtz racing family has a remarkable record of 42 wins on Pikes Peak, and has won one or more classes on “the Hill” every year since 1993.