Keith Rauch was born in 1969 in Phoenix, Arizona. His racing career began at the age of 4 1/2 when his father, Ed, purchased his first Quarter Midget. Keith raced Quarter Midgets until he turned 14, running locally at South Mountain Speedway and travelling to national events. During this time, he notched more than 300 main event wins in several different classes, with his most memorable wins at the Las Vegas Championship and the California Indoor Championship in Sacramento. 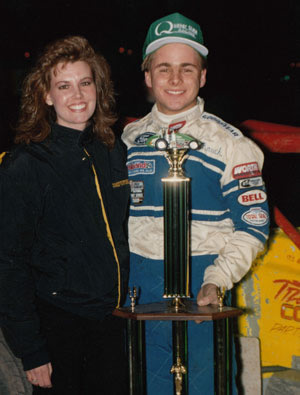 At the age of 15, Keith started racing Micro Midgets with much success, and at the age of 16, he moved up to the larger engine class, winning many races including the 75-lap Arizona Championship Race.

Keith’s next career move was to full size Midgets in his dad’s Cosworth. One of his biggest highlights was winning the Hank Arnold Memorial Race driving for his dad. Later, Keith raced in the Western World Championships, driving for the legendary Wayne Weiler. They made the feature, but mechanical issues forced them out. However, his efforts didn’t go unnoticed as Denver’s Tony Finley was there and approached Keith about coming to Denver to drive his Midget.

The spring of 1991 presented one of Keith’s career highlights when he received a call from Parnelli Jones to drive his son’s, P.J., car for the first televised ESPN Thursday Night Thunder Race in Ventura, California. P.J. had a prior commitment, so Keith flew out to California and won the feature. Keith continued to race the Thursday Night Thunder and Saturday Night Thunder series dirt events in Ventura, California for a couple of years while driving for John McLaughlin and John Lawson. Keith raced many other tracks around the country driving for Andy Bondio, Duane Esslinger, Joe Dooling, Sean Birmingham and many others.

Keith’s considers his biggest accomplishment in the #77 Finley car to be in 1990 when we won the Quaker State United States Auto Club National Championship in El Centro, California.

In addition to racing locally and nationally, Keith also made two separate trips to Australia to race “down under.”