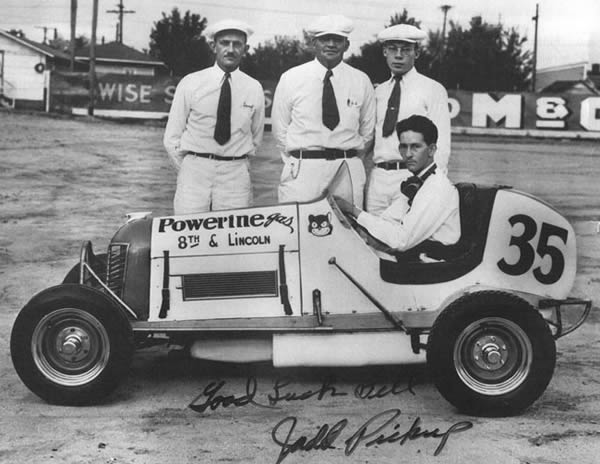 Judd was born in Wiggins, Colo. in 1915. He began midget racing at Merchant Park in 1937 under the assumed name of “Kid Wilson” so his parents wouldn’t find out he was involved in such a dangerous sport. His first midget was an Elto 4-60 outboard he bought from Walt Killinger for about $500. He won a main event during his first season racing. He then began racing in a midget owned by George and Jack Speak, after their driver, Vic Felt, was injured. During the 1938 season while racing at Lakeside Speedway, he made midget racing history. During that season, he recorded an amazing nine wins in a row, won 15 out of 17 races and claimed the 1938 Colorado Midget Racing Championship. He also set the Lakeside Speedway track record of 15 seconds. He continued to race through the beginning of the 1939 season and then turned the machine over to Lloyd Axel. Axel won five features in it, finishing fifth in Denver’s American Automobile Association points. Judd then sold the car to help finance his education at the University of California, Berkeley. In addition to racing, he also served in the Navy during World War II and worked for the Champion Spark Plug Company until his retirement at age 65.