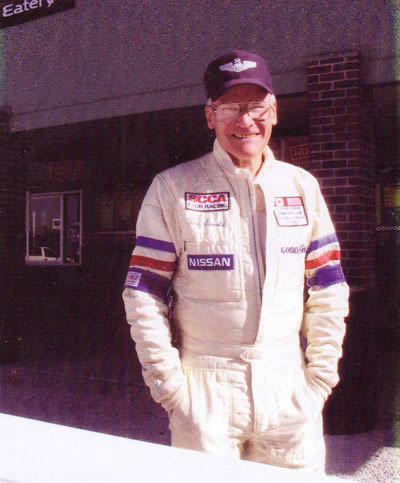 Edwin “Tex” Arnold was born in 1933, in Staten Island, Borough of Richmond, New York. Tex graduated from Lehigh University in 1955, with a Bachelor of Science degree and Second Lieutenant bars. After graduating “Top Gunner” in numerous pilot training classes, Tex’s first operational assignment was the 405th Fighter/Bomber Wing at Langley AFB, Virginia, flying F-100’s. He would serve in the Air Force for the next 20 years including a tour of duty in Southeast Asia in 1966 where he flew 136 combat/combat support missions. He retired from the Air Force with the rank of Lt. Colonel in 1977.

Tex’s racing career began in 1961 competing in local autocross, gymkhana and rally events. In 1962, he earned his Sports Car Club of America competition license. In 1964 and 1965, he competed in the G Modified Class. He then earned an invitation to the American Road Racing Championship at Daytona. He ran as high as third place before an engine malfunction dropped him to a sixth place finish.

In 1981, he worked for FAF Motorcars, rebuilding Ferrari engines. He drove a Ferrari Tour de France in the Sebring Vintage Race that year finishing first in class and second overall. He was then hired by Group 44 to work on the Jaguar GTP project. In 1983, he was hired by Automobiles International to race-prep more than 20 race cars for mainly historic and vintage races.

In 1984, Tex was hired by Forristall’s GT Cars to race-prep cars from the John Mecom stable. Also that year he co-drove with Toly Arutunoff in the very first One Lap of America. In 1985, he went to Walker Racing to race-prep mostly Ferrari Race cars. In 1986, Tex worked with the Texas American Race Team to convert Ex-Indy cars to newly designed CAN-AM cars. In 1987 and 88, he returned to Toly Arutunoff’s AI shop to race-prep cars. He also drove in SCCA events and teamed with Arutunoff to drive at Sebring in the Firehawk Series. From 1990 to 1993, he worked for Jack Beck at Orion Engineering, rebuilding and race-prepping a wide range of SCCA and historic cars. In 1997, he moved to Parker, Colorado, and has won eight SCCA Rocky Mountain Divisional Championships between 1998 and 2012. His current ride is a Formula Continental Van Dieman.

Throughout his racing career, Tex has held many SCCA regional and executive offices, has won more than a dozen division championships, has worked on, race-prepped and driven some of the most complex race cars in the world. He has competed against the likes of Sir Stirling Moss, Roger Penske, Bobby Rahal and Gilles Villenuve.

Tex and his wife, Patc, also a long-time SCCA official and past director of club racing, reside in Parker, Colorado.