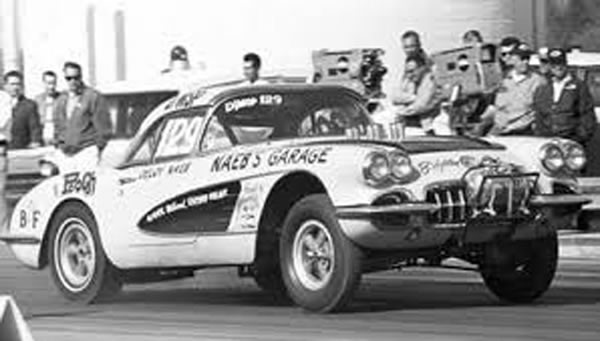 While growing up in Brighton Colorado, Deloy and Herb Naeb spent countless hours in the auto repair shop operated by their dad, Reinold Naeb, who was also a participant in weekly local dirt track racing events. Deloy and Herb traveled with Reinold to the dirt tracks, and Denver’s Lakeside Speedway was their “home” track. Deloy began racing his own dirt modified in 1952, an effort that led to a sponsorship by Denver’s Viner Chevrolet in a 1955 Chevrolet dirt late model. Saturday night dirt racing usually resulted in Deloy returning home with a trailer full of muddy, broken parts. After several years, Deloy decided to focus his after-hours efforts on the up and coming drag racing scene.
Deloy began campaigning a 1955 Chevrolet locally in the C/MP class in the early 60’s. In 1963, he heard of a well abused, wrecked, partially complete 1958 Corvette stored in a shed not far from home, and he purchased the car. Deloy’s best friend, Keith Hitner, then proposed that they name the Corvette “The Pooch”. The Corvette was raced in the C/MP and D/MSP in the 1965 through 1968 racing seasons with few changes, winning the N.H.R.A. World Street Eliminator title in 1966. The car was retired from competition in the late 1960’s, while Deloy owned and operated Rocky Mountain Dragway in Denver, Colorado. The car then accompanied Deloy in his move to Tejeras, NM, where it was sold and stored for 30 years. The car was located, purchased and a complete restoration was finished in 2013.
Some of the “Pooch’s” and Deloy’s notable history include:

A great friend was lost on November 28, 2014 when Deloy passed away at his home in Tijeras, NM. His outstanding accomplishments and contributions to drag racing are recognized with his induction into the Colorado Motorsports Hall of Fame, class of 2015.