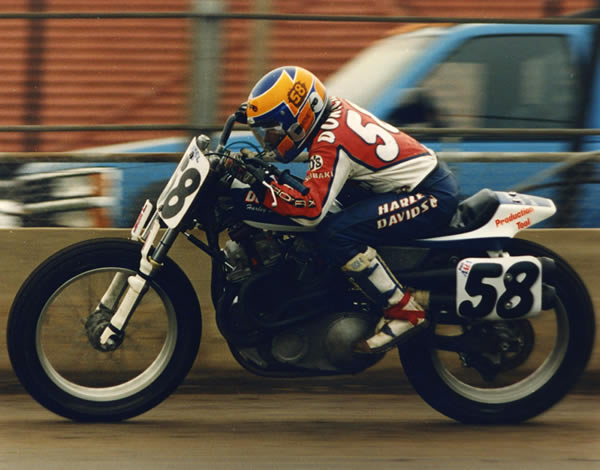 Davey Durrelle got his first motorcycle at age ten, rode in his first race at age eleven, and won his first short-track race in 1978.  In 1980, he turned pro and became Novice Pro #127K.  He won both Sturgis half-mile events that year and finished the year as 8th-ranked novice in the nation.  He moved to the expert division in 1982, and won major races at the DuQuoin, Illinois mile and Sturgis half-mile over the next two seasons.  After racing as much as he could from 1984 to 87, he formed a racing team with Butch Donahue to compete in the AMA National Series. The team was a success, finishing high in the order at major events in Indianapolis, Springfield, Pomona, and San Jose mile tracks.  After winning the Camel Challenge at San Jose in 1992, he suffered significant injuries in two separate incidents that led to a curtailed racing schedule in 1993 and 94.  He retired from the Grand National Series in 1995.

His record speaks clearly for itself—he is a “champion’s champion” and a most deserving inductee into the Colorado Motorsports Hall of Fame!